What is Agriculture ?
Agriculture is the production of food and goods through farming.
Are you know about the history of agriculture ?
Agriculture was developed at least 10,000 years ago,and it has undergone significant developments since the time of the earliest cultivation. Evidence points to the Fertile Crescent of the Middle East as the site of the earliest planned sowing and harvesting of plants that had previously been gathered in the wild. Independent development of agriculture is also believed to have occurred in northern and southern China, Africa's Sahel, New Guinea and several regions of the Americas. Agricultural practices such as irrigation, crop rotation, fertilizers, and pesticides were developed long ago but have made great strides in the past century. The Haber-Bosch method for synthesizing ammonium nitrate represented a major breakthrough and allowed crop yields to overcome previous constraints.
In the past century, agriculture has been characterized by enhanced productivity, the replacement of human labor by synthetic fertilizers and pesticides, selective breeding, and mechanization. The recent history of agriculture has been closely tied with a range of political issues including water pollution, biofuels, genetically modified organisms, tariffs, and farm subsidies. In recent years, there has been a backlash against the external environmental effects of mechanized agriculture, and increasing support for the organic movement and sustainable agriculture. read more...
Sumerian harvester's sickle, 3000 BC, made from baked clay. 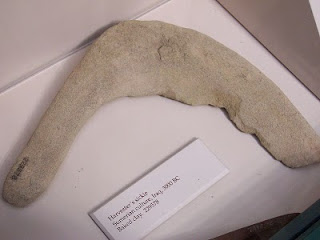